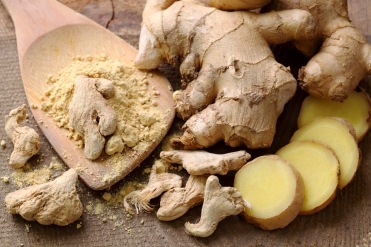 Fresh Ginger Root (Sheng Jiang) is a commonly used herb in Chinese Medicine. The reason I am so in love with ginger root is not only because of its many health benefits, but also because of the accessibility of it. Unlike multiple other TCM (Traditional Chinese Medicine) herbs, ginger root can be found at pretty much any and every grocery store. It is also wonderfully easy to cook with, juice and/or apply topically. Ginger’s properties in TCM include; pungent, warm, effects the Lung, Spleen and Stomach meridians. It warms the Lung to stop coughing, warms the middle to stop vomiting and energizes the middle. And lastly, it disperses wind-cold (common cold).

Ginger helps to stimulate digestion, therefor helps ease digestive discomforts. It is not just that ginger stimulates digestion, but that it aids in assimilation of nutrients making them more “bioavailable” in the blood stream. Also, with it being warm and pungent in nature, it helps to unclog the channels.

“Fresh ginger is used to break down high-protein foods… and lessen the effect of uric acids in the body from eating these foods.” (Healing with Whole Foods). Adding ginger, cumin, and coriander with bean dishes diminishes problems with flatulence. You can also add ginger to mucus-forming foods, such as milk, yogurt, sour cream, kefir, etc. to help with digestion. 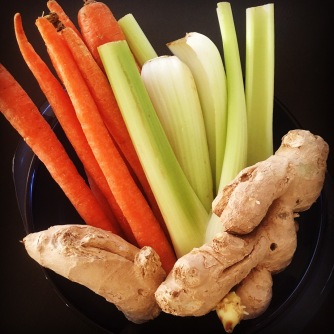 Ginger also has the ability to combat nausea, which can range from morning sickness to the flu, and even chemotherapy. Fresh ginger is so effective at decreasing nausea because it helps regulate the direction of Stomach Qi. The stomachs natural direction of Qi is downward, so when vomiting begins that can mean Rebellious Stomach Qi, by introducing ginger into you tea or diet during that time it will significantly help decrease vomiting and nausea. Because fresh ginger root is pungent and warming, which is downward, it is a popular kitchen medicine in the east for nausea and vomiting.

A wind cold invasion, also known as the common cold, is almost defenseless against ginger. As stated above, ginger helps to warm the lungs and disperse phlegm. I don’t know about you, but I love anything that helps me get over a cold in a natural way and quickly!

As you may know, from discussion or previous posts, I have had a bit of experience personally with inflammation in the past. Reason #174 why I love Ginger – drum roll please…. Ginger has anti-inflammatory agents. It also has been known to treat hypertension, although must be avoided if there are heat signs.

In Chinese medicine fresh ginger root is used to reduce toxicity, both medical and seafood. That is why it is common in Chinese culture to steam fish with ginger root and green onion, because ginger is an antidote to fish poisoning. It is also why Japanese eat pickled ginger and horseradish/wasabi with sushi, also because raw fish has such cold energy, it needs balance by warming.

If you are similar to me and you love anything warm and tend to shy away from cold ginger root is for you. I for one, use ginger to help with PMS symptoms including muscle aches and nausea. I also use ginger in my komutcha to help warm my body. I am chronically yang deficient, as I learnt more about ginger; it quickly became my best friend.

Ginger should not be used in excess if you experience a lot of heat signs.

Bring to a boil.

Steep till cool enough to drink.

The Foundations of Chinese Medicine – Maciocia