Chances are you know someone who has frozen shoulder symptoms. Frozen Shoulder, also known as adhesive capsulitis, “… is a condition characterized as stiffness and pain in the shoulder joint. This term tends to be used when the cause of the pain and decreased range of motion is unknown. Signs and symptoms typically start gradually and worsen over time…”. Frozen Shoulder is a disorder of the connective tissue in the rotator cuff region where there is motor impairment, pain, and inflammation. 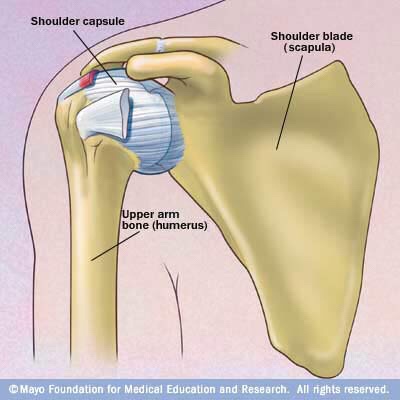 There are typically three stages in which Frozen Shoulder develops;

1. Increased pain with movement and limited range of motion.

2. Decreased range of motion to the point where it might be difficult to do daily tasks. Sometimes there can be a decrease of pain during this stage as well.

Although Doctors aren’t totally sure what causes Frozen Shoulder, there are a few reasons that can increase someones chance at experience Frozen Shoulder symptoms.

“The researchers concluded that acupuncture relieves Frozen Shoulder pain and improves shoulder functional ability.” Acupuncture can help with a large number of shoulder issues, including Frozen Shoulder. Acupuncture works well for Frozen Shoulder by needling a combination of motor points to help release the tight muscles, as well as specific acupuncture points that increase the flow of Qi in the affected area. You may notice that your acupuncturist is needling various spots other than your affected shoulder. Your Acupuncturist will do this because of the flow of the meridians, there are a few meridians that intersect with the shoulder. They include; Large Intestine, Small Intestine, and San Jiao. So depending on your other symptoms (if any) and the location of the pain, your Acupuncturist will make an educated decision to needle associated meridians. There is actually a point on your leg that helps with shoulder pain, so don’t be too surprised if you get a few needles placed in the lower half of your body when you come in for shoulder pain! Stretching will also be a very important key in your recovery. Similar to the motor point portion of your acupuncture treatment, the goal of stretching is to help lengthen the muscle and bring it back to its natural state.

So if you have been- or know someone who has been – experiencing shoulder issues, acupuncture might be the next step you need in your healing process.

For more information on how acupuncture can help your shoulder pain, you can email me at info.tsacupuncture@gmail.com.

Have you heard of Nightshades before? Nope, it actually isn’t a window covering specific to the night – surprising, right…?

Nightshades, also known as Solanaceae, are a family of flowering plants. They include a variety of plants such as; perennials, annuals, lianas, epiphytes, shrubs, trees, weeds, spices, medicinal plants, and ornamentals. Nightshades are unique because of the potent alkaloids they contain, some are so high they are actually toxic. ‘Alkaloids are nitrogenous organic substances produced by plants as a secondary metabolite and which have an intense physiological action on animals even at low doses’.

Some of the common house hold nightshades include but are not limited to;

Note: Neither Sweet Potato nor Black Pepper are Nightshades, even though white potatoes and various peppers are. This is simply because the plant is different.

To humans, alkaloids can be desirable or toxic. A large portion of the population will not have an issue with nightshades, however, nightshades can have a negative impact on people with autoimmune diseases or even people with a sensitive digestive system.

Evidence has shown that people with Rheumatoid Arthritis have experienced increased joint pain and/or stiffness associated with Nightshades. Although there is not a singular reason as to why nightshades can increase joint pain, there are a few studies that explain it well. A study was done on mice with IBS (Inflammatory Bowel Syndrome), when the mice were fed potato skins the inflammation increase substantially. The higher the alkaloid content in the potato, the worse the inflammation.

This theory suggests that Nightshades were designed specifically to contain alkaloids for the simple reason that it is poisonous. It truly is an ingenious design. Nightshades contain alkaloids at different quantities that act as their very own pesticide. With this ability, they are able to preserve themselves longer and are less likely to be overtaken by mold or insects. The higher quantities tend to be in the leafs and stem; since we don’t eat that part of the plant and we are bigger than insects, the alkaline quantity tends not to bother most people. However, a connection between higher alkaloids in a plant and increased inflammation in autoimmune diseases is quite prevalent.

Another theory suggests it has to do with Vitamin D absorption. Although Vitamin D is a necessity, Nightshades can have a very potent quantity of Vitamin D3. This can actually prevent proper calcium metabolism, therefor causing the body to deposit calcium in the soft tissue.

I can’t stress enough that Nightshades do not have a negative effect on everyone. The people that will notice the negative side of nightshades are mostly either individuals with autoimmune deficient and/or digestive disturbances. Nightshades can be extremely high in nutrients and vitamins, therefor being beneficial to individuals who don’t suffer from an autoimmune disease. So, if you don’t have an autoimmune disease or digestive sensitivities, then just keep on doing what you’re doing with Nightshades. If you do have an autoimmune disease or digestive sensitivities, then I would highly suggest cutting out night shades for about two weeks completely, and then slowly introduce one at a time back into your diet. By doing this you will be able to notice if one particular item increases inflammation/stiffness/pain/digestive issues. Once you have identified the culprit, you can confidentiality have a positive impact on your own health.

My experience with Nightshades:

As you may know, I was diagnosed with an autoimmune immune disease when I was twelve. I learnt about Nightshades about six years ago and it was such a relief to be able to help pin point what caused stiffness and pain in my body. I totally eliminated Nightshades and then introduced them back into my diet one at a time. I have noticed that potatoes and peppers are the main culprits in the Nightshade family – I have an increased discomfort and stiffness within the hour after eating them. Whereas, with tomatoes, I notice no such thing. So feel free to play around and listen to your body, it will tell you which (if any) Nightshades should be eliminated.